Social media is sort of like the holy grail for startups–the great equalizer. You don’t need a multi-million dollar advertising budget to jump onto social media and become an overnight success.

Well, of course, we know that that it’s not quite that simple. Social media does open up a lot of opportunities for young businesses. But it’s not a magic button you can just press.

We can learn a lot about how to build an audience for your startup by looking at some ideas that other companies have used to grow their presence.

Magic Leap does…something….with VR or AR. We know that much.

Other than that? It’s a bit unclear. Because the company hasn’t officially launched any products to date. Yet they still have nearly 70,000 Facebook fans.

How’s that? By starting early. 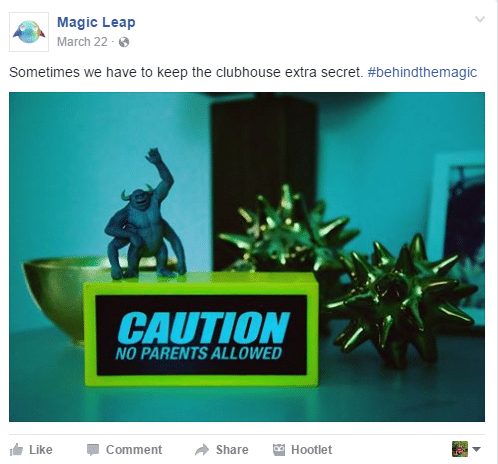 They’ve been posting content on their Facebook page as far back as 2012 while the technology their building is in the works. Each of their posts seems a bit cryptic, a bit hopefully–and perhaps a bit quirky. But they stay consistent in casting a vision for a world where what we consider to be “reality” is a bit blurry.

Still working on your product or service? Now’s the perfect time to start building your social media following!

Too often, companies wait until launch day to ever make a peep on social media. Then, when the day finally comes, they launch to…crickets–or, even less than crickets–because they have no one to promote to.

Start building your audience way before you launch. As early as it makes sense. Use some teaser content rooted in your brand’s vision for the world to generate some excitement. You don’t have to be a VR Jedi to post cool and compelling content.

Hold onto your hats. We’re about to hit a patch of irony.

Whisper is a social media app that’s used to share anonymous secrets online. But apparently they’re just too juicy to keep under wraps. The company’s Facebook uses simple, branded content with some of the best “whispers” from their app. And they go super viral. 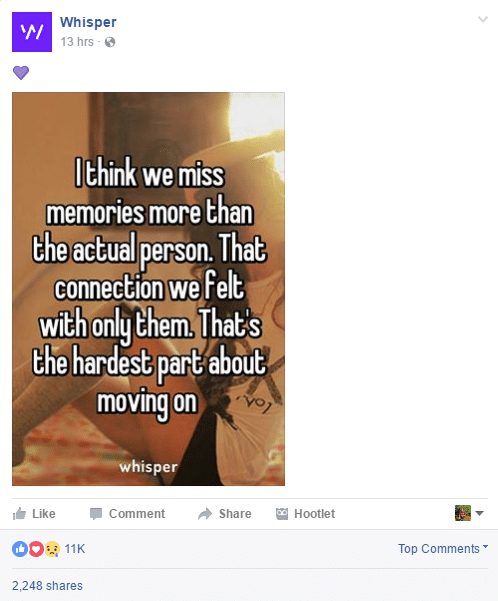 As of this very moment, they have well over 2 million Facebook fans. Many of their posts have 10,000 shares or more.

Without being able to see the actual engagement metrics, it’s pretty fair to estimate that a post with 10,000 shares has been seen by something like 2-3 million people. That’s a lot. And they nail this kind of post almost once a day.

Your social media content strategy does not have to be crazily complicated. Something as simple as templated, branded, text-based content can do well. As a social media user, you probably see this all the time–friends sharing inspirational quotes and funny quips in image format.

The key is the words that are on those images. Test different kinds of messages–funny, inspirational, irreverent, sarcastic–that fit within your brand’s voice to see what resonates with your audience. As you dial in what works, you’ll see your engagement and shares start to tick up. You may also want to invest some money in paid distribution of the ones that work well to drive cheap engagement and hopefully generate growth for your social account.

Instagram is a phenomenal way to grow a business, especially a lifestyle or fashion brand aimed at the millennial crowd.

The combination of striking visuals and fluid discovery makes it perfect for both established and new companies to get the word out about their brand. The founders of Hustle & Grind Co shared how they used Instagram to build a massive following and launch their brand–almost entirely through a single social channel.

How to seal this idea

Don’t be afraid to sell via social.

We all know that most social media users will be turned off by a hard sales pitch–especially if you’re beating them over the head with it every single day. But if you do it well and build a loyal and engaged audience on the right platform, you can parlay those follows and likes into actual dollars.

4. Photography Website Snaps Up New Fans with a Giveaway

The company SnapKnot had been shifting their marketing efforts toward social to try to build an organic community. It had worked–to a certain extent. But they eventually hit a plateau of about 8,000 fans. That’s a respectable number, but they wanted to keep growing.

So they did a promotion to grow their audience. It was a fairly simple giveaway–with a camera as the prize for a randomly-chosen participant.

Although the prize was a nice win, the overall investment was fairly small. And running contests on Facebook really isn’t groundbreaking territory.

Still, the campaign was crazy effective.

They achieved over 900% growth in their Facebook fan base, and saw a 60% month-over-month uptick in traffic to their site. Plus, they had built a pretty huge (that’s about 80,000 fans altogether, for those keeping score) installed base for future social promotions.

Not too bad for the price of a camera.

Give a little, get a little, as they say. Sometimes giving a nice incentive to your audience is all the reason they need to help promote you like crazy.

You can use some free tools and utilities to set up a lightweight giveaway or offer and encourage your existing fan base to share or engage with a post to keep it circulating. Build a social aspect into it to maximize reach. Have contestants tag a friend they would like to share the prize with, or allow entrants to gain additional chances to win by sharing or promoting the contest.

One of the biggest questions to ask yourself about your social media account is: Why would people want to follow or like our company? What’s in it for them?

Obviously, you can do giveaways or other offers to help sweeten the deal. But you could also make the deal sweet all on its own. Case in point: Humphry Slocombe, an ice cream shop in San Francisco. 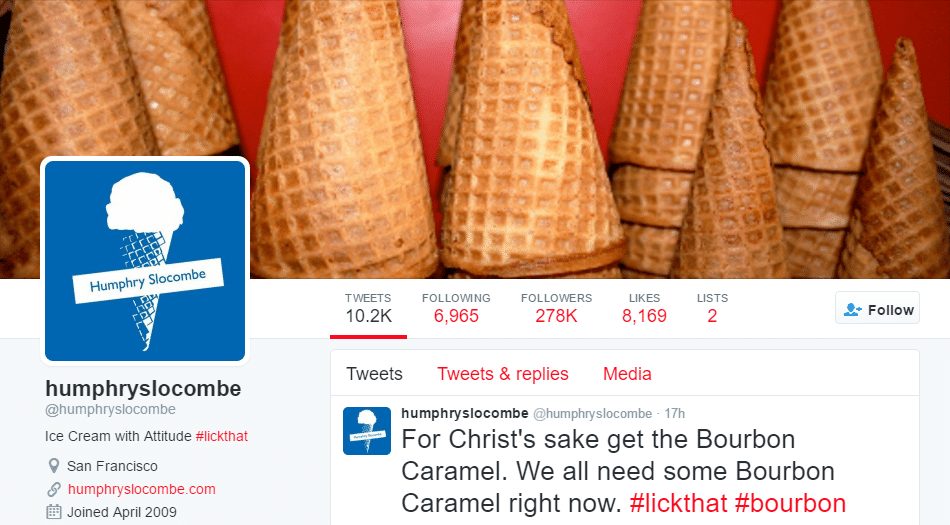 They have amassed almost 300,000 followers on Twitter. Why are so many people glued to this seemingly “boring” account? To find out what ice cream they’ve got today, of course!

Part of Humphry’s business model is a rotating selection of ice cream concoctions. And while it may sometimes be an annoyance to not know what they’ll have on a particular day, it’s turned into a sort of virtual scavenger hunt for patrons–following them online to see when their favorite flavor hits the scoop.

How to steal this idea for your startup

Give a core component of your business a social touch.

If your startup sells shoes, then say that Twitter followers will get to know when the latest shoes are available. If you sell software, tell your customers that Facebook fans will get exclusive access to new features. You don’t have to give people a huge reason to follow you–anything is better than “just cause we want you to”.

Everything You Ought to Know About the Best Embroidered Hats

Many businesses use custom hats to gain brand visibility. They will…

Inspiration for Your Store: The 14 Best Baseball Caps

Some fashion trends take off and stay relevant for a few…

The Definitive Guide to the Best Custom 5-Panel Hats

The origin of 5-panel caps may be unclear, but one thing…

Subscribe to our newsletter for awesome pics, discounts & more. No BS, promise!